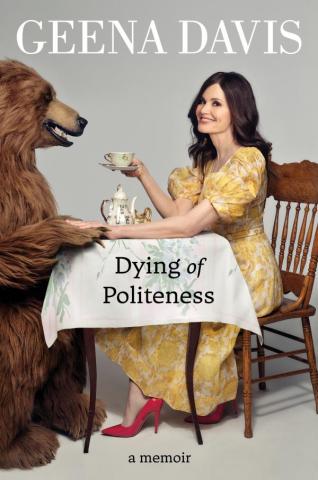 Two-time Academy Award winning actor Geena Davis, at the age of three, announced to her parents that she was going to be an actor. She has appeared in several roles that became cultural landmarks, including Muriel Pritchett in The Accidental Tourist, Thelma in Thelma & Louise, and Dottie Hinson in A League of Their Own. She is also a world-class athlete and a member of the genius society Mensa. Davis is now recognized for her tireless advocacy for women and girls as founder and chair of the nonprofit Geena Davis Institute on Gender in Media, which engages film and television creators to dramatically increase the percentage of female characters, and reduce gender stereotyping in media made for children.

Dying of Politeness: A Memoir is Davis’ story, one woman’s journey to fight for herself and ultimately live a bolder, freer, more authentic life. “In this book,” says Davis, “I’ll reveal the ways in which my public life, the movies, the advocacy, and my relationships have impacted and empowered the private me, and I hope, inspire my readers to expand their own sense of power.” Davis regales readers with tales of a career playing everything from a soap opera star in her underwear to a housewife-turned-road-warrior, a baseball phenomenon, an amnesiac assassin, the mother of a rodent, and the president of the United States.