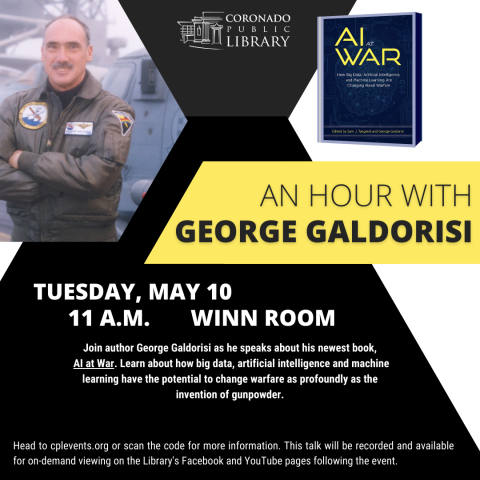 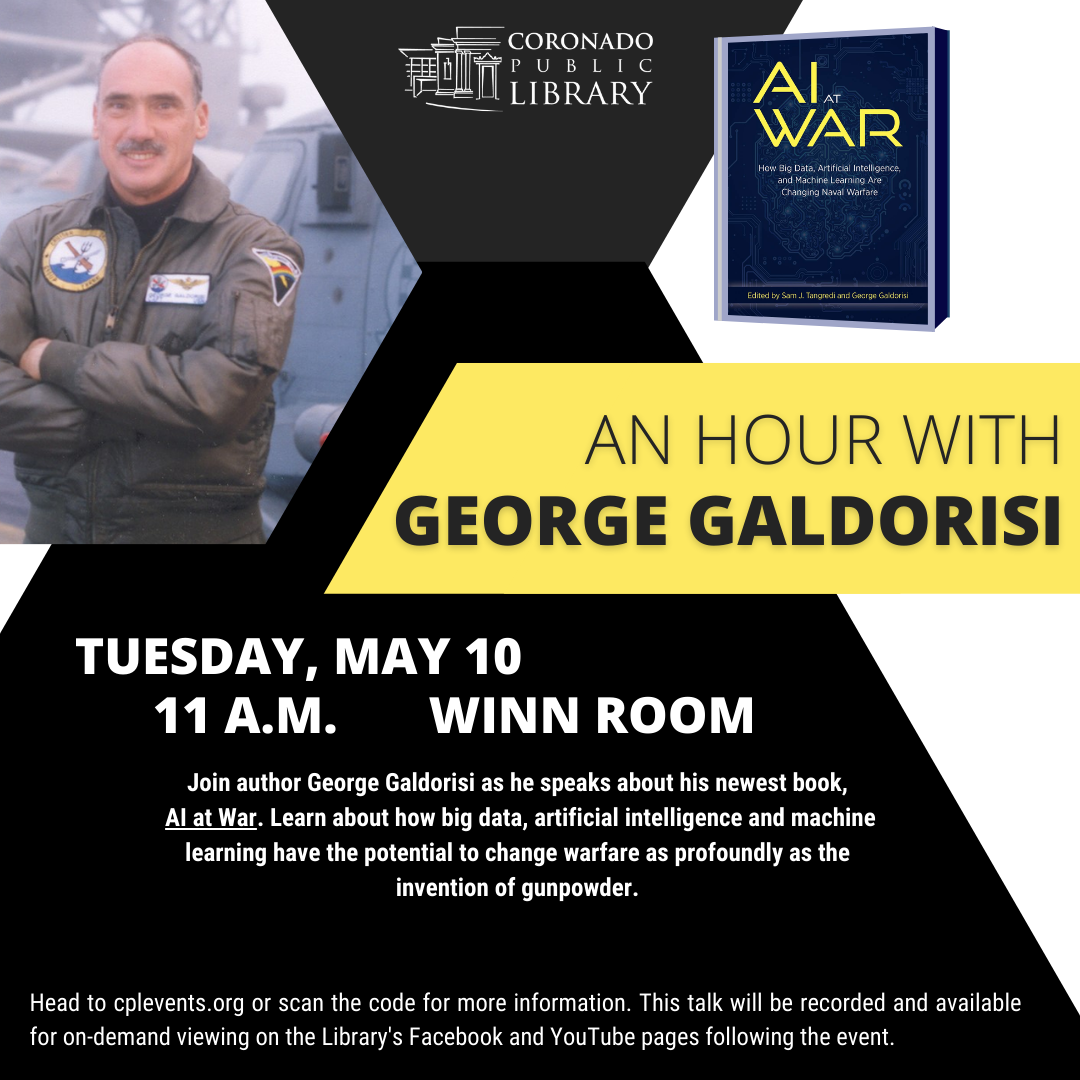 Join author George Galdorisi as he speaks about his newest book, AI at War. This book is the first to deal with the military and naval application of artificial intelligence (AI) in a comprehensive and pragmatic fashion. It presents the widest possible viewpoints on the actual (as opposed to theoretical) use of AI in war and will appeal to all interested in this subject.

Register below to receive a reminder email about this event. Registration is not required.

George Galdorisi is Director of Strategic Assessments and Technical Futures for the Naval Information Warfare Center Pacific. Prior to joining NIWC Pacific, he completed a thirty-year career as a naval aviator, culminating in 14 years of consecutive experience as executive officer, commanding officer, commodore, and chief of staff.

During his career as a naval aviator he completed an array of operational assignments in all five Navy fleets. After completing a tour as Test Director in the LAMPS Mk III helicopter Program Office, he was one of a small cadre of officers who stood up the Navy’s first LAMPS Mk III squadron, HSL-41. His operational assignments culminated in commanding officer tours of HSL-43, the Navy’s first operational LAMPS Mk III squadron, HSL-41, the LAMPS Mk III Fleet Replacement Squadron, USS Cleveland (LPD-7), and Amphibious Squadron Seven. His last operational assignment spanned five years as Chief of Staff for Cruiser-Destroyer Group Three, during which he made combat deployments to the Western Pacific and Arabian Gulf embarked in the USS Carl Vinson and USS Abraham Lincoln. During this final tour he also led the U.S. Delegation for military-to-military consultations with the Chinese Navy.

He began his writing career in 1978 with an article in U.S. Naval Institute Proceedings. He has written fourteen books, including the New York Times best seller, Tom Clancy Presents: Act of Valor, the novelization of the Bandito Brothers/Relativity Media film and The Kissing Sailor, which proved the identity of the two principals in Alfred Eisenstaedt’s famous photograph. His reboot of the best-selling Tom Clancy’s Op-Center Series includes three consecutive the New York Times best sellers, Out of the Ashes, Into the Fire and Scorched Earth. His most recent fiction project is a new series of Rick Holden thrillers published by Braveship Books (The Coronado Conspiracy, For Duty and Honor and Fire and Ice). His most recent non-fiction project is AI at War How Big Data, Artificial Intelligence and Machine Learning Are Changing Naval Warfare. Additionally, he has published more than four hundred articles in professional journals and national newspapers.

He is a 1970 graduate of the United States Naval Academy and holds a Masters Degree in Oceanography from the Naval Postgraduate School and a Masters Degree in International Relations from the University of San Diego. He graduated from both the Naval War College’s College of Command and Staff and the College of Naval Warfare, and in 1994 he received the Naval War College’s Admiral John Hayward Award for Academic Achievement. Additionally, he is a graduate of MIT Sloan School’s Program for Senior Executives.