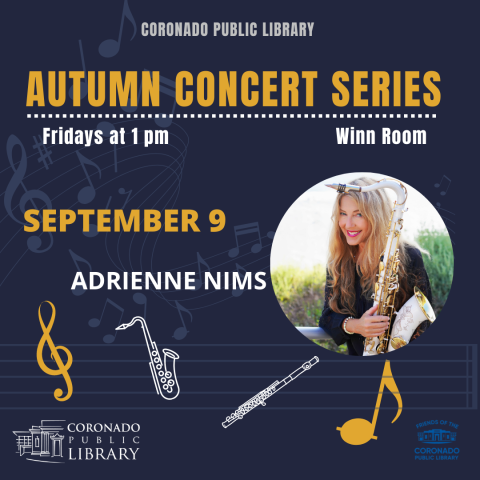 Join the Library for our Autumn Concert Series on Fridays from September 2 to October 28. Each concert will begin at 1 p.m. in the Winn Room. Doors will open 15 minutes prior to the performance. This weeks series will feature flutist and saxophonist Adrienne Nims.

Though her early formal training focused on classical music, Nims quickly developed a deep interest in jazz and world music. She started with piano and flute, and by age 13 was also playing the saxophone and performing professionally in big bands and classical ensembles. Nims's group, Sprit Wind, has performed at venues such as the Getty Museum of Los Angeles, California Center for the Arts, the San Diego Zoo, and major jazz festivals and classical music series. In her professional career, Adrienne has opened for acts such as Spyro Gyra, Kirk Whalum, Joe Cocker, Fourplay, Don MacLean, Boz Scaggs, and Steppenwolf. She is an accomplished studio musician with credits on over 50 albums including her own, and television soundtracks as well. In addition to her work as a performing and recording artist, Nims is also an educator teaching flute and saxophone as well as a masterclass presenter for institutes and foundations.