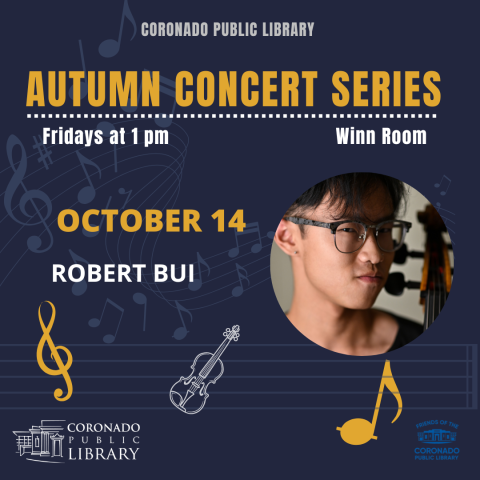 Join the Library for our Autumn Concert Series on Fridays from September 3 to October 28th. Each concert will begin at 1 p.m. in the Winn Room. Doors will open 15 minutes prior to the performance.

On Friday, October 14, cellist Robert Bui will play classic as well as contemporary cello pieces that expand upon the instrument's sound possibilities.

Robert Bui, with equal merit as a composer and performer, creates and challenges new music at both the level of conceptualization and physical embodiment. He yields musical products full of diverse ranges of subject material drawing from multiple mediums. He graduated with a Bachelor’s in Composition from the New England Conservatory as a Presser Scholar and the Class of 2021 commencement speaker. His primary teachers included composer Stratis Minakakis and cellist Mickey Katz. Between 2018-2021, he served as the leading director of Tuesday Night New Music, a monthly series of student-composed new music concerts hosted at the New England Conservatory. Currently, he is a doctoral student in Contemporary Cello Performance at the University of California, San Diego.

Bui is currently recognized as a cellist in ensembles such as Palimpsest Ensemble, Alinéa Ensemble, La Jolla Symphony, and Pacific Lyric Association. He has appeared as a soloist in Sergei Koussevitzky Shed, Seiji Ozawa Hall, and Jordan Hall. As a new-music specialist, Bui has been dedicated over a dozen pieces by living composers in both solo and chamber settings. He has been a frequent performer in Palimpsest Ensemble, the Tuesday Night New Music Series, nec[shivaree], NEC Contemporary Ensemble, and concerts curated by his ensemble, Alinéa, of which he is a founding member. Alinéa is a contemporary music group dedicated to music by living composers and new performance practices. The ensemble has produced a series of events including composer portraits, a microtonal-themed concert, multiple US premieres and a virtual music festival “Everything but the Kitchen Sink,” featuring interviews and solo works of prominent composers.

Outside of music, Bui has enjoyed a variety of other titles such as portrait/event photographer, polyglot, fashion enthusiast, hair stylist, and latte artist.